Below is a collection of financial and economic imbalances that have been emerging.  These imbalances are very likely to revert and over correct using history as a guide.  It can’t be predicted as to when or what events will trigger these reversions.

Investors are paying more for less.

EBITDA is like rent on a rental property.  EBITDA is earnings before interest, taxes, depreciation and amortization.    If you rent a property for $800 per month your EBITDA is $800 per month. Companies have been helped by cheap money in driving their earnings, but the “rental” income from the S&P 500 has declined as the price of the S&P 500 has increased.

Corporate profit margins are 70% above the norm at 11% of the economy. Labor Share at an all time low.

Corporate profits are out of historical balance relative to wages compared to the size of the economy. They have always reverted in the past.

Corporate profit margins have consistently reverted to the mean.

Economist John P. Hussman has shown that corporate profit margins are just the inverse of government and household savings, below is a clip from this link: http://www.hussmanfunds.com/wmc/wmc131216.htm 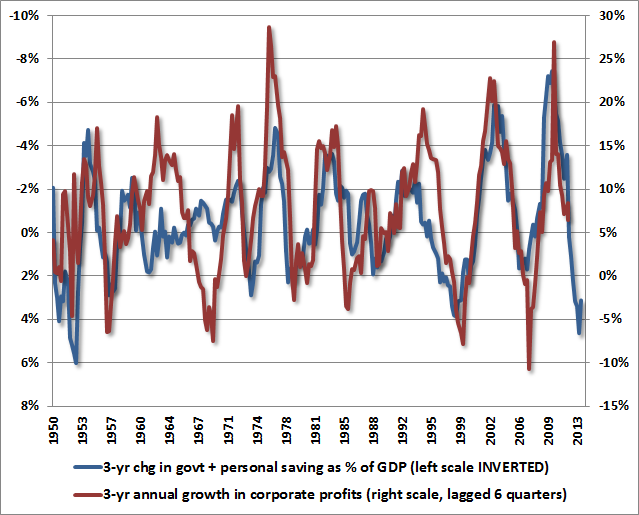 While valuations (at least partially based on excessive corporate margins) are stretched.

Here are a couple of stock market models that combine various factors.  One thing about models is that you must assume that each time is different because it is.  So the models don’t work the same way each time or sometimes they fail.

One model is from here: http://www.hussmanfunds.com/wmc/wmc131223.htm

The chart below uses these factors:

1. S&P 500 Index overvalued, with the Shiller P/E (S&P 500 divided by the 10-year average of inflation-adjusted earnings) greater than 18. The present multiple is actually 25.

2. S&P 500 Index overbought, with the index more than 7% above its 52-week smoothing, at least 50% above its 4-year low, and within 3% of its upper Bollinger bands (2 standard deviations above the 20-period moving average) at daily, weekly, and monthly resolutions. Presently, the S&P 500 is either at or slightly through each of those bands.

3. Investor sentiment overbullish (Investors Intelligence), with the 2-week average of advisory bulls greater than 52% and bearishness below 28%. The most recent weekly figures were 55.2% vs. 15.6%. The sentiment figures we use for 1929 are imputed using the extent and volatility of prior market movements, which explains a significant amount of variation in investor sentiment over time.

The blue bars in the chart below depict the complete set of instances since 1928 when these conditions have been observed. 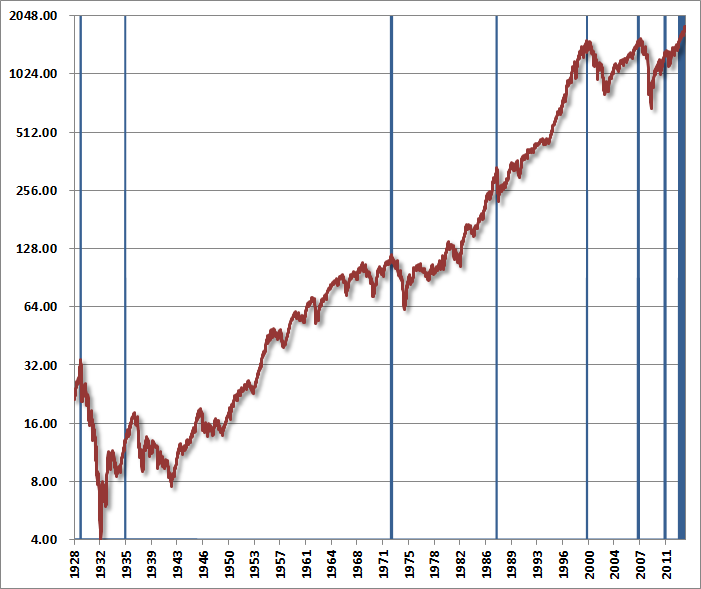 Here is another model from:  http://greedometer.com/ Note that the period around 2000 was back tested so it was not real time. The authors claim that the points to the right of 2000 is a real time model.

Markets are free to ignore models.   They are not a predictive machinery either. They measure the current state of affairs.   Much like a thermometer reads 100 F in July, it has no idea it is going to be -10 F in January.  If, in fact, it turns out that assets values have been pushed too high by excessive easing, markets don’t have a opinion on this or a forecast they simply react when the excessive easing has been reduced.   Markets could very well continue higher into 2014 or even 2015 before a mean reversion takes place.